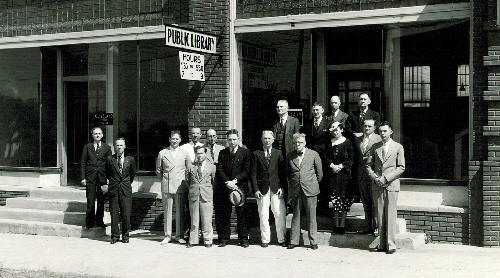 The first librarian was Mrs. Edyth Graham. It is surprising to read from the annual report for 1936 that the collection contained 2,127 books. Annual circulation was 20,279. The number of borrowers was 1,019 with 300 of these from out of town. The Association began the tradition of encouraging donations of money and books to keep the library current. Committees assisted the librarian in many ways. A summer reading program was held in 1936. Programs of this sort have been continued through the years. The library was first located in office space on the first floor of the Cleveland National Bank building, now the Cleveland Bank. In the early 1940s, it relocated to the far west end of the second floor of the bank building.

The Board of Trustees for the Association met with the City Commissioners in 1937 to seek a one half-mill levy for library support. The Commissioners appropriated $150 for the fiscal year 1937-38. From this point, support from the City of Cleveland has continued to keep the library serving the community.

A “constitution and bylaws” for the library association was drawn up by a committee and adopted on March 27, 1937. Members of the committee were Mr. Frank Moore, Mrs. Glen Campbell, and Mrs. C.D. Carney, assisted by Mrs. Frank Graham, the librarian.

Mrs. Walter Parrish succeeded Mrs. Graham as librarian in 1947. While the library continued to grow and serve the public, the Board of Trustees left the day to day business in the hands of the librarian. No meetings were held from 1954 until 1970. At that time, the library was located at 109 West Delaware. The Youth Center at 111 West Delaware was offered by the City for library use. The Board of Trustees became active again in securing furnishings for the new facility. The Cleveland Public Library remained at that location until July 2002. Many additions of shelving materials, and computers and some remodeling took place during this time.

In the 1980s, the Board of Trustees began efforts to secure state aid for the library. This required that the library be open for a minimum of 30 hours per week, and be funded in part through city budget appropriations. When this was accomplished, the Cleveland Public Library became eligible for grants through the Oklahoma Department of Libraries. Numerous grants were received. A five-year plan was developed with the goal of securing a larger facility. This lead to the application for a federal matching construction grant, administered by ODL. Cleveland was the last Oklahoma community to receive such funding.

A Friends of the Library organization was founded to help raise the $100,000 in matching funds. With the passing of an increase of the city sales tax rate and a portion earmarked for the library, a grant from the Helmerich Foundation, and numerous fund raising activities, the goal was met and plans were drawn up for the remodeling of the 1930 school building at 215 West Wichita.